Houses take on the Beatles in singing competition 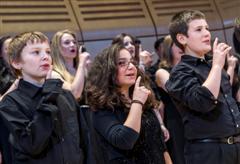 Last night former Cathedral School Headmaster, Mr Lindsay Gray was welcomed back to school, tasked with being Simon Cowell for the evening to judge the School's House Singing competition.

Themed on Songs from The Beatles, the three Houses wowed the audience at the Royal Welsh College of Music and Drama with a mix of House Choir and A Capella performances from more than 100 pupils.

Having been Director of an International Charity, The Royal School of Church Music, since 2008, Mr Gray said: "It was really lovely to be invited back to school to be a part of such a prestigious event.  Music is extremely important in school life, especially at the Cathedral School, bringing people together of all ages, which is something you don't find in many activities.

"The standard was very high indeed and I was amazed by some of the A Capella arrangements.  It's wonderful to see music continuing to flourish at the School and I would encourage pupils to get involved, as it really does add so much to life."

Judged against six criteria, it was very close, with Teilo announced as this year's winners, followed closely in second place by Euddogwy and Dyfrig in third.