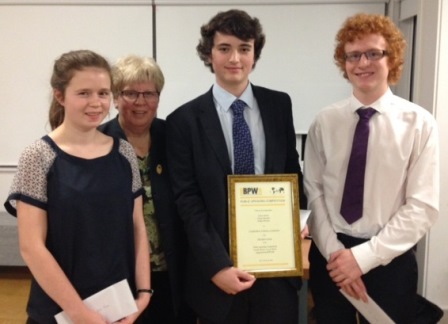 This week, three Lower Sixth students participated in the regional round of the BPW Public Speaking competition, which took place in the Sixth Form Centre and involved six different teams from schools around the area.

The CSL team was made up of Gwyn E, Grace A and Arthur W, who took on the roles of speaker, chair, and proposer of the vote of thanks, respectively. Gwyn spoke for six minutes on the topic of the benefits of reality TV, giving an impressive and insightful speech before fielding questions from members of the audience.

As chairperson, Grace then introduced the speaker from the Bishop of Llandaff team, inviting questions and summarising the debate in an assured and eloquent manner, while Arthur offered a vote of thanks which involved listening closely and commenting on various aspects of their speech.

Despite facing strong opposition from Howell's, Haberdashers' and Bishop of Llandaff, CSL won ‘best team’ in the competition, and we will now take part in the regional final, which takes place in Bristol at the end of January.