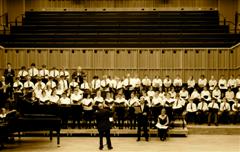 Parents and staff were treated to a stunning evening of music last Saturday night at the St Cecilia's Day Concert.

Featuring 135 pupils from the Junior and Senior Sections, the Wales Millennium Centre's Hoddinott Hall proved once again to be the perfect venue for this outstanding event.

Eight of the School's music groups took to the stage during the first half showcasing the wide ranging musical talent, including themes from the ‘Pink Panther' and ‘Mission Impossible' and highlights from the Sound of Music, as well as more classical performances from the Boy and Girl Choristers.

The girl choristers were particularly pleased to be performing Cantate Domino, written specially for them by Mr Mervyn Burch MBE.

Well known to many from the Old Spice advert and more recently from the X-Factor, the second half was an ambitious performance of Carl Orff's Carmina Burana, accompanied by two pianos and percussion, which was met with rapturous applause from the audience.

Conducting the work with ease, Mr Hoeg received a well deserved standing ovation at the end of the event when it was announced that he will be retiring at the end of this academic year.