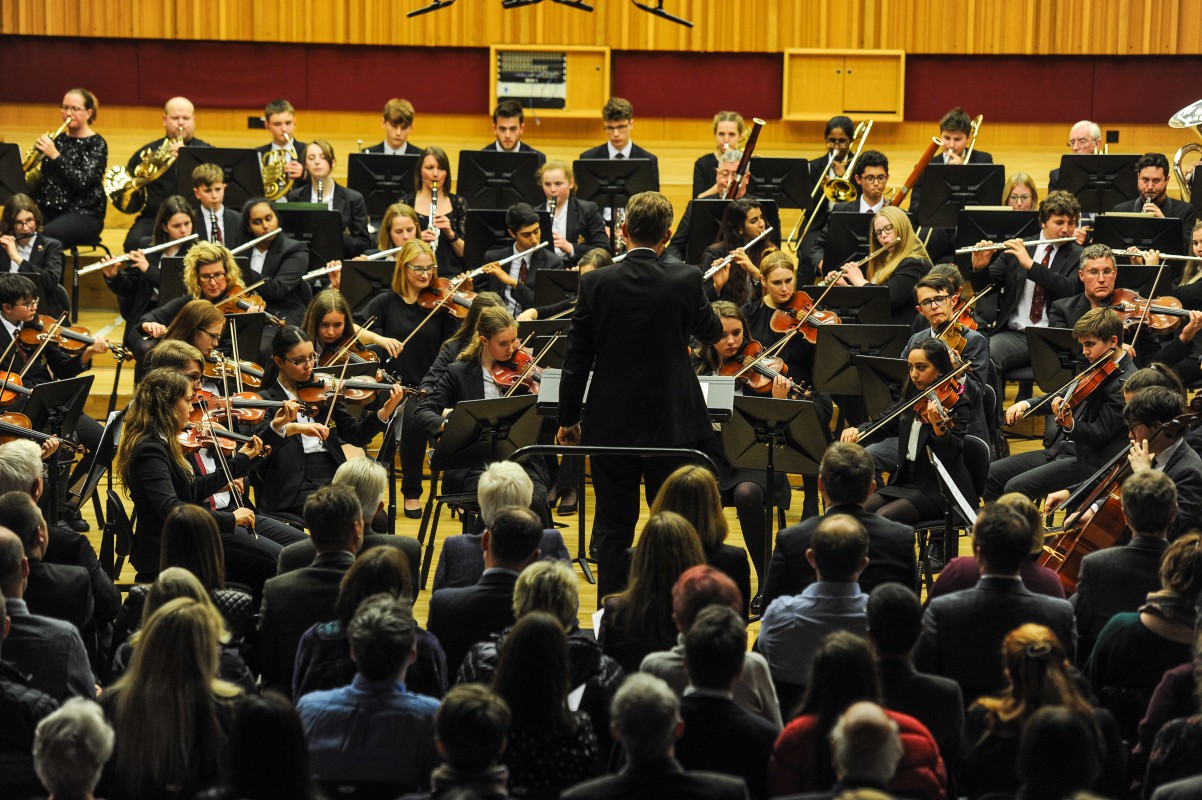 On Friday 22 November the Music Department staged its eleventh St Cecilia’s Day Concert since first established in 2009. Always intended as a showcase event, exhibiting the very highest standards of musicmaking possible, this year’s concert was no exception and involved an unprecedented, 203 pupils, teaming up with supporting staff and professionals. Rehearsals took place on a weekly basis since September, encouraging regular attendance and high standards of commitment, leading to some very impressive and highly polished musical performances. Great emphasis is placed at CSL on the immense value of contributing to co-curricular musical activities, substantially enriching each pupil’s musical development and wellbeing. The fruit of such vibrant co-curricular musical opportunities was abundantly obvious.

Senior Orchestra began with the Downton Abbey Suite, containing most of the famous themes from the popular TV series and recent film adaptation. This was followed by Richard Wagner’s magnificent concert prelude to Act 1 of Die Meistersinger von Nürnberg – played in full. Numbering 54 student players, Senior Orchestra is in very healthy shape indeed. Growing to larger proportions in recent years, and benefiting from enhanced rehearsal experiences, Senior Orchestra has, in tackling Wagner’s Meistersinger Prelude, engaged with some of its most difficult and sophisticated repertoire to date. Most certainly, the final performance of both pieces was quite sumptuous and, at times, exhilarating.

Senior and Advanced Percussion Ensembles (directed by Mr Bradley) demonstrated skill and dexterity in their tightly prepared performances of Mitchell Peters’, Yellow After the Rain, and Graham Bradley’s Silent Bells. The myriad of orchestral percussion instruments involved was most impressive and gave rise to colourful and detailed rhythmic textures.

Sinfonia, our ‘second’ orchestra, presently numbers 60 players – another impressive statistic. Catering for players in Years 7-10 of mostly Grade 2-5, Sinfonia is renowned for its sense of fun and engendering a love of orchestral playing in our younger musicians. Korean Folk Rhapsody is a sophisticated composition that evolves through various moods and colours, involving the orchestral sections in changing capacities but always with melodic lyricism and rich harmony at its core. The inimitable Baby Elephant Walk was particularly well received by the audience and was hugely enjoyed by the pupils, not least due to its Boogie Woogie style and catchy riffs.

String Ensemble was at its biggest ever, with over 30 pupils involved. Led by Ms Blackman, repertoire included Bach’s vibrantly energised Brandenburg Concerto No.3, and the theme from Jurassic Park. Meeting every Thursday afternoon, the ensemble remains one of our most popular.

The first half of the concert brought our most advanced Junior Choir, Cantemus (directed by Ms Gretton) to the stage. Numbering 40 pupils, Cantemus is singing better than ever, with pupils positively radiating their enjoyment and musical exuberance. A fantastic rendition of Bob Chilcott’s Kyrie from A Little Jazz Mass was followed by A Friend Like Me, each accompanied by Jazz trio (Mr Hill, Mr Bradley, Ms Grimley). Without doubt, this must have been one of the best ever performances from Cantemus, both songs being sung with total conviction, accuracy, and involving sophisticated vocal divisi.

After the interval, Brass Ensemble (directed by Mr James) heralded the second half with an arresting performance of the Theme Tune from ‘Rocky’. Positioned in a long line, on the highest riser at the back of the stage, Brass Ensemble attained a commanding perspective, benefiting from the space and fine acoustic of the Hoddinott Hall. This was followed by a stylish rendition of Bizet’s Toreador’s Song from Carmen.

Senior Flute Choir (directed by Mrs Jones) was on great form, again strategically positioned to take full advantage of the stage area. Involving 14 players from Year 7-13, their performance of Eine Kleine Nachtmusik was both delightful and musically engaging.

Jazz Band played three songs: Come Fly with Me, Can you Feel the Love Tonight, and Mercy, Mercy, Mercy. Each piece was delivered with real assurance and rhythmic precision, also maintaining close ensemble togetherness. The effect was really stylish and clearly a hit with many in the audience. Ameila F came to the stage to sing Elton John’s Can you Feel the Love Tonight, once again demonstrating her superb vocal maturity, stage presence and stylistic conviction.

To culminate, as veterans of the St Cecilia Concert have come to expect, Senior Chamber Choir took to the stage; a seemingly endless stream of singers, forming up to produce a choir 124 voices, in 6 long rows! In a change perhaps to the norm, our choral piece this year was a medley of songs from Les Misérables, accompanied by a professional String Ensemble and Rhythm Section, using a bespoke arrangement produced by Ms Blackman and Mr Aspden. The musical outcome was simply fabulous, and it is difficult to imagine how anyone could have enjoyed this more than they did. The choir was on absolutely top form, perfectly capturing the changing moods of each song, ranging from At the End of the Day, Castle on a Cloud, to Bring Him Home.

An extravagant concert by any standards, this was a concert for everyone to enjoy; celebrating and championing the fantastic musical opportunities at CSL, record pupil involvement, and the unique pleasure to be had in singing or playing as part of a large ensemble. Almost certainly reaching maximum proportions and superlative performance standards, this must surely rank as one of our finest ever concerts.

Huge thanks and appreciation go to all the pupils and staff involved – we hope you enjoyed it and will remember the concert in years to come!