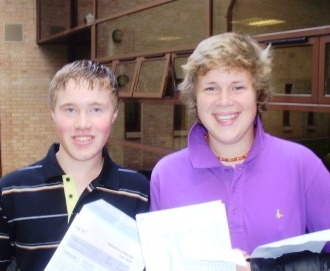 It has been a very joyful day at the Cathedral School; we are delighted at the level of success at GCSE for our Year 11 pupils.

For the sixth consecutive year, well over half of all the GCSE grades were either A* or A grades and 97% of GCSE examinations sat by pupils this summer emerged as either A*, A, B or C grades. The most common grade achieved throughout was A*.

One fifth of the pupils gained exclusively A* or A grades:  including head boy William Searle and head girl Rhiannon Hickinbottom.

Headmaster Stephen Morris expressed his satisfaction at these high achievements: "Cathedral School pupils have shown that gifted teaching and sustained hard work are rewarded with the top grades at GCSE. We are proud of these terrific performances in serious academic subjects."

The Cathedral School has a mixed ability intake but has been, for the last 5 years, one of the highest achieving schools in Wales at GCSE, with equally strong achievements for boys and girls.

The Year 11 cohort consisted of 61 boys and girls from Cardiff and the surrounding area.