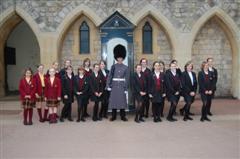 On Wednesday 3rd November the girl choristers departed to Windsor for a master-class with the renowned organist Tim Byram-Wigfield followed by evensong in Windsor Chapel. They had prepared his beautiful Magnificat, and were to be conducted by the composer.

Met by Mr Byram-Wigfield, they rehearsed in the magnificent setting of the Chapel - covered in gold plaques of some royal significance.

Girl chorister Mel Goss said: "This was a fantastic experience and at one point we even had to step over the tombstone of King Henry VIII! Beth and Jenny both sang solos, and the whole choir really raised their performance under Mr Tim Byram-Wigfield's guidance.

Assistant Director of Music at the Cathedral School, Mr Simon Lovell-Jones added: "The girls were impeccably behaved throughout and did the School and Cathedral proud."