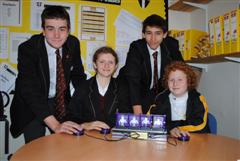 Mr Andrew Goss, who accompanied the pupils said: "If having to compete against teams which included sixth formers was not enough of a challenge, we were also drawn in the toughest of groups.

"After a comfortable victory over Monmouth our next opponents were the reigning champions from Hereford Cathedral School. A titanic battle ensued and, after a spirited comeback, it was CSL who emerged victorious.

"The semi-final saw us overcome a strong Rougemont team and progress to the final against our near neighbours, Howells.

"With the team now brimming with confidence, a final victory was won by 540-140 and the trophy returned to Llandaff.

"Well done to all of the team, we are looking forward to the inter-regional round which will take place in the New Year."