Giving thanks for 50 years 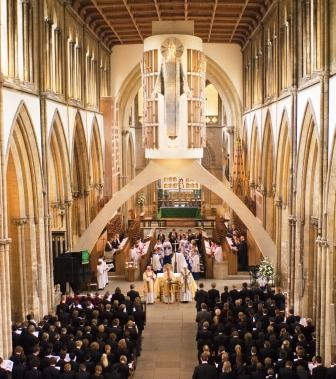 The Senior Section of the Cathedral School gathered in Llandaff Cathedral this morning (24 September 2008), along with 100 guests, to give thanks for the fiftieth anniversary of the school moving from Cathedral Green (where it had been based since 1880) to the current campus, the site of the old bishop's palace. The Archbishop of Wales, Dr Barry Morgan, concelebrated the Eucharist along with the Provost of the Western Division of the Woodard Corporation, Bishop John Kirkham.

In his Sermon, the Senior Provost of the Woodard Corporation, Canon Brendan Clover, spoke to the school about vocation. The readings had been the call of Isaiah, the conversion of Saul and the call of the Disciples of Jesus to be 'fishers of men'. Father Brendan told the school: 'God wants you - each of you - to make a difference'.

Music for the service was provided by the Brass Ensemble, the boy choristers, girl choristers and the Chamber Choir. Michael Hoeg, the school's Director of Music, played the organ.

At the end of the Eucharist, the congregation processed from the Cathedral to the school via Cathedral Green, recalling the momentus move of fifty years ago, and at school the Senior Section, along with the Juniors and Infants, gathered to sing the school song and to receive the Archbishop's pontifical blessing.