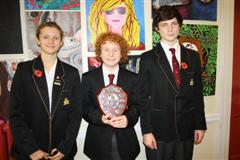 The Cathedral School team made the short trip to Howells on Thursday afternoon to compete in the Senior Schools' Challenge quiz.

Placed in the tough half of the draw, CSL played well to defeat Rougemont 510-300 and Haberdashers' Monmouth 530-170. Their reward for this performance was a semi-final against Monmouth.

Throughout history there have been many great sporting duels. Many will recall McEnroe and Borg, Coe and Ovett or Frazier and Ali; well in quiz terms, CSL vs Monmouth is a contest worthy of such esteemed company.

An enthralling contest was decided by the last starter question and thanks must go to a calm and cool Harrie C. She kept her head when everyone else was losing theirs and led her team to victory by 460-390.

The final saw CSL defeat Hereford Cathedral School 450-220 and win the title of Regional Champions for 2011. The upper age limit for the Senior Challenge is Yr13 and, with the other sides fielding two 6th Form students in their teams, this was a very impressive performance. We shall now look forward to the next stage of the competition - an eliminator for the National Finals - which will take place later in the academic year.